It's Christmas at Our House

Since we head back 'home' for the holidays, we have our Christmas a few days early.  The kids are young enough that they don't know what the date on the calendar is, and they figure they're just lucky because Santa comes twice.  This year it was a huge surprise for them because we didn't let on at all.  We didn't do any Christmas Eve celebrating or put cookies out for Santa.  They just woke up to a big surprise when they saw gifts under the tree.  Their expressions were priceless, and we got it on video.
The girls opened up books, movies, pajamas, sweaters, etc.  Then, when they thought it was all over, we told them they had one more gift.  D.R. made them close their eyes and brought them in the other room, where this was waiting... 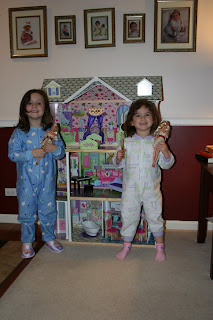 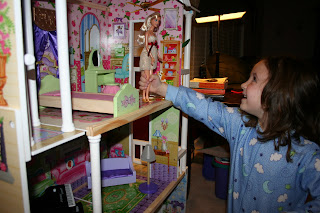 Santa must have done a good  job at picking out the right gift because they have played with this non stop for 2 days.  Most importantly, they've watched a lot LESS TV!
So we'll head out to NY on Thursday for Christmas with the family.  We're all super excited to see everyone.
From our family to yours, have a very safe and Merry Christmas and Happy New Year!

Letting go, and Letting Them Grow

I haven't posted a 'challenge of the week' in quite a while, so I guess I'll write about two of them now.
The first one is once again about Tia not wanting to try any new foods.  I think we just might be (fingers crossed) turning the corner on that one.  She's in preschool now and is (sometimes) more inclined to try the foods her class mates are having.  I can tell she really wants to try things but just can't bring herself to do it.  So, the other day she decided that she'd like to taste a banana.  You might not think that's such a big deal, but in Tia's world, it's huge.  She not only tried a banana, she liked it.  Alleluia!  This was such a momentous occasion, I had to take a picture of it.  OK, it's not chicken and broccoli, but at least we're moving in the right direction. 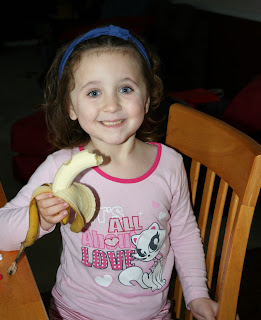 Now for the next challenge.  At both of the girls' preschools they have encouraged us to get rid of sippy cups.  Eek!  Allow the kids to use regular cups and have spills at the dinner table?  Yup, they claim spills and messes are all part of the process and the only way they will learn.  Not only that, but they have the kids pour their own drink at snack time, using small pitchers of milk and water.  All I could think was "Oh God, we're not doing that in our house".  Well, I was in the store last week and those little pitchers were staring at me, daring me...I had to buy one.  So, as it turns out this was much more of a challenge for ME than it was for the kids.  They haven't had one spill all week and have really been enjoying their new independence.  Look at how proud they are... 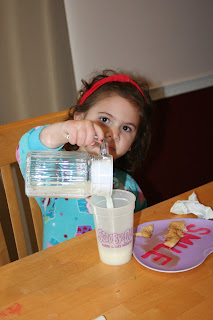 It only took me from September until now to learn to let them grow up a little.  I have to accept that they're not babies anymore (sniff), and get joy in hearing them say "Mom, I can do it all by myself". 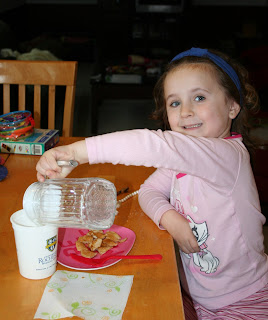 Labels: Challenge of the week, Pictures of my angels

On Sunday we were expecting a major storm here in the mid west.  We actually didn't get all the snow that was predicted, but we did get some super low temperatures and LOTS of wind.  On days like that I don't want to leave my house, so I have to come up with things to keep the kiddos busy.  After watching way too much TV, reading lots of books, and playing the Wii for about an hour, I remembered I had this... 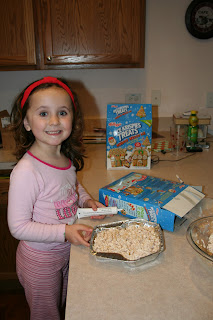 I bought the kits back in January because they were marked WAY down and I knew one day the kids would love to use them.  Rice Krispie's don't go bad so it was a pretty good buy!  The treats are supposed to come out looking like a gingerbread house, like the one you see on the box.  Well, they didn't look anything like a house but the kids didn't care.  They had a great time making abstract art with the icing and edible decorations.
Check out how different these girls are...


This project kept them busy for quite a long time.  It's amazing what those little minds can create when given the opportunity.

Check out the finished products!
Not a bad snow day.  Not bad at all!
Posted by Ronda at 9:39 AM No comments:

We Love our Library

We spend a considerable amount of time at the local library.  Thankfully our kids love it there and truly enjoy reading.
Every year just before Christmas, they close the library for a couple of hours and put on a wonderful "Holiday Open House".  It's amazing all the work that goes into this one evening, and it's all free!  The entire event is organized by volunteers.  Here are a few pics from this year.

We look forward to this event every year and as you can see, the kids had a wonderful time.  Support your local library!
Posted by Ronda at 8:45 AM No comments:

One of the many reasons I love that my kids go to Christian preschool is the annual Christmas pageant.  They sing traditional Christmas songs and even sing Happy Birthday to Jesus.  I love it!  Most public schools these days aren't allowed to celebrate religious holidays for fear of offending someone, and I understand that.  However I'm a traditional person and I like things like they were in 'the good old days'.
Here is Gia at the pageant.

These are the best moments of my life.  So sweet.
Posted by Ronda at 6:23 PM 1 comment:

I'm not sure why, but I had a hard time getting into the Christmas spirit this year.  I dreaded digging the tree and decorations out of the basement and lugging them up.  I did it for the kids, just like my Mom always did it for us.  After we were done, the looks on the girls faces made all the effort worth it.  They had so much fun.

The girls have been having a grand time moving the ornaments around the tree every day.  They love playing with the Winter village and moving the people around from house to house.  I've also been allowing them to wrap one or two presents each day, for our friends and extended family.  They get so excited to see what they'll be giving to their loved ones, and haven't once asked if they can have the presents for themselves.

So, even when I don't have the energy, or feel in the holiday mood, these sweet little faces get me out of my slump and make the holidays cheery and bright!
Posted by Ronda at 12:39 PM 1 comment: