They Really Do Love Each Other

My kids fight about everything, and it's constant. It drives me nuts. I can't believe the ridiculous things they will argue about, like who gets the yellow cup at dinner and who has the better pen. It's maddening.

Then, one of them gets sick, and this happens... 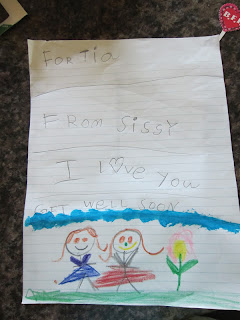 Tia was sick with a very high fever. Gia could see how uncomfortable she was, and I'm sure she sensed my concern. All on her own, she made little get well notes and left them in various places around the house. 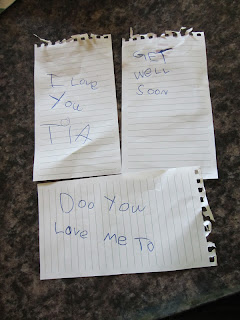 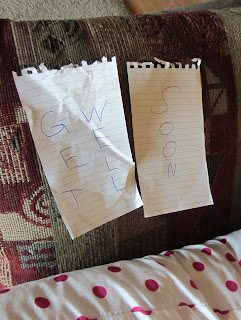 All day long I heard things like "Tia, are you OK?" and "How is your throat now, is it better?".
That just melts my heart, and reminds me that they really DO love each other.
I must be doing something right.

Labels: Our Many Blessings

There's a saying that goes something like "When you're a home owner, there's always a project". I'm here to say "Ain't that the truth!". It never ends.

I kept saying I just wanted ONE room in our new house to be truly complete. That's it, just one. Well, I think it's official, both the kids rooms are just as they want them, which in my mind means they are complete.
Of course the rooms have been liveable for some time, but we needed to do some finishing touches.
This was the last of it...


We ordered these wall decals well before we even put in an offer on this house. We just knew the girls would love them, and would add an extra little something to their rooms. We were right. Tia said "I think I love my room more every day".

I've taken on quite a few projects myself, which I'm pretty sure qualifies me as insane considering that the basement still is not unpacked!

We were given this very '80's looking piece of furniture when we were first married. We used it in our first house, and then it sat in the basement in the last house, collecting dust. 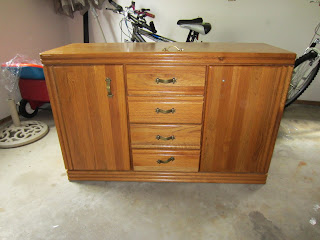 Well, since we have a finished basement here, we needed a TV stand. I don't like buying new if we already have something that can be used. So, here's what I did... 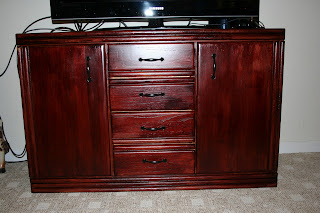 I stripped the heck out of that thing. It has so much polyeurethane that it took forever, and lots of chemical to get it all off. I sanded and sanded until I was covered in dust. It was a big mess. I even had to email my friend AmyJo for advice (she's the resident expert on such things).
Then I bought new hardware, and there you have it!
I think it turned out pretty well for a basement TV stand, don't ya' think?

The girls and I also planted a vegetable garden and are already seeing some sprouts. I was sure they'd be super excited about the whole process, and sadly I was wrong. They're not really into it. Tia got excited when she saw her lettuce sprouting, but she's over it. I'm hoping once we actually have a harvest to show for our (and by our, I mean MY) labor, they'll get into it.
I'm just happy that we'll have fresh tomatoes, cucumbers, carrots, lettuce, squash and peppers, and I won't have to pay these ridiculous grocery store prices for a couple months!

We've been checking out the gardens around the property, seeing what's coming up. I've enjoyed all the colors that are sprouting up all over the place. I almost don't even mind the gigantic weeds that go along with the gigantic yard. Almost.

I'll leave you with a few pictures from around the yard.
Enjoy! 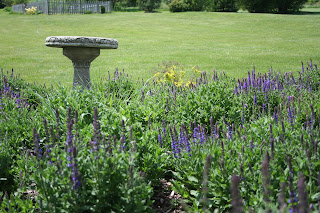 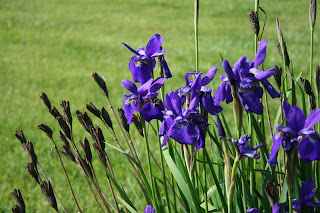 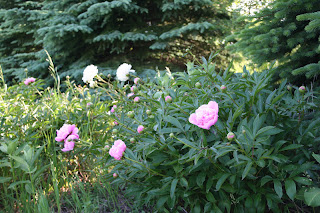 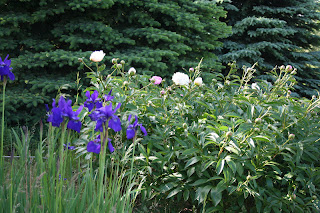 We actually had a whole weekend devoted to celebrating Mother's Day this year.

On Saturday we took the kids to the Milwaukee Zoo for a few hours. We typically do something like that on both Mother's and Father's day, so that's just what I wanted to do this year. It was a little chilly but we really enjoyed our time there, and got a lot of walking in. Great bonus for me since I haven't joined the gym here yet. 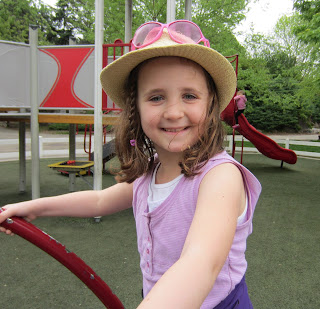 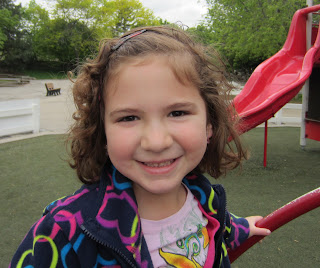 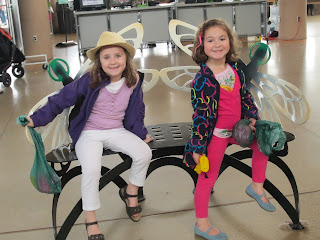 On Sunday morning I was awakened at 5:45am. by a bright, smiling face and a great big "Happy Mother's Day" from my 6 year old. She told me she was too excited to sleep, and couldn't wait to tell me. I love her enthusiasm for life!

The only thing I wanted for Mother's Day was a family trip to Culver's for ice cream. OK, I lied, I also asked for a park bench to put on the front porch, but we haven't found the right one yet, so that's on hold for now.
So, the most important thing I asked for was that we all go out for ice cream together as a family.
Daddy doesn't eat ice cream but us 3 girls each ordered something different and we all tasted each other's. It was divine!
It was the first nice weather weekend we've had since we moved in. So when we got back from ice cream we all got to work in the yard. We were out there for a couple hours and then the hubby suggested we go out for Chinese food. I had expected to have to cook dinner (yes, even on Mother's Day!) so it was a pleasant surprise to go out. We just went to a little 'hole in the wall' place that we've been to before, but it was so nice to not have to cook or clean up, and to be surrounded by the people I love the most!

The girls wanted to get a little dressed up for the occasion, and I'm glad they did because we got some nice pictures. 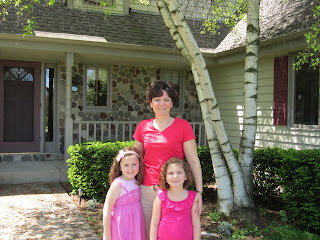 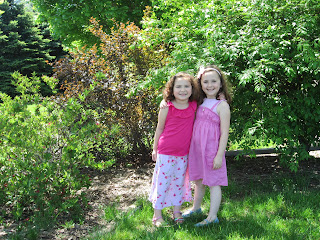 I have to say it was a great weekend and I definitely felt the love. The girls said the only things that would have made it better is if their Grandmother's were here. I have to agree with that one.

I hope you all had a very happy Mother's Day too!
Posted by Ronda at 7:47 AM No comments:

It's been a while since I've had even a minute to sit down and post something. We're officially in our new house, and it's starting to look like home around here.
A lot has happened in the past couple of weeks, so let me see if I can catch you all up.

The movers arrived on a Sunday morning and hauled all of our worldly possessions away in a big white truck. Since we weren't closing on our Illinois house for another few days, the girls and I stayed back in a hotel, while hubby followed the truck to the new house. We figured there wasn't much sense in going to Wisconsin only to have to turn around and come back a couple days later.
This way they got to finish out a few things at school and say goodbye. They LOVED staying in the hotel. It was like a mini vacation for them, except that we had to get up and go to school every day.
While they were at school, I was able to get into the old house and clean. I wanted to leave it in great shape for the new folks.
Gia's last day of school was that Wednesday. I was the parent volunteer that day too, which worked out nicely.  I loved being able to see her in action at school. 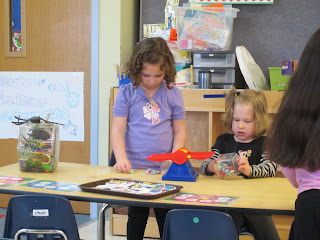 They made a nice goodbye poster for her, and all the kids signed it. At the end of the day I got to take some pictures of her with her favorite people. 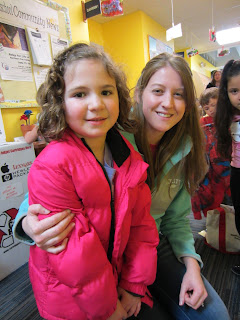 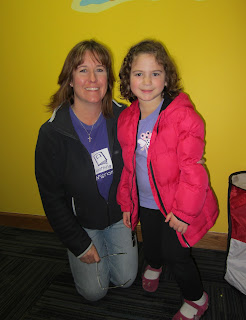 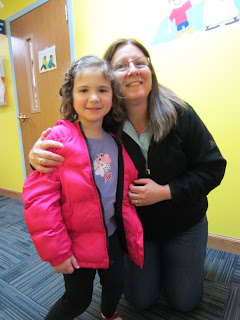 These ladies are just the best! We've had such a good preschool experience because of their love and dedication. We will surely miss them, and their smiling faces every day.

Thursday was Tia's last day at her school. The teacher invited me in at snack time so I could take pictures, see the baby chicks that had just hatched, and say goodbye. 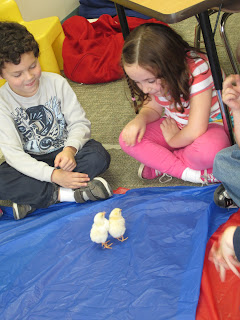 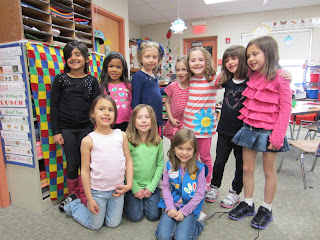 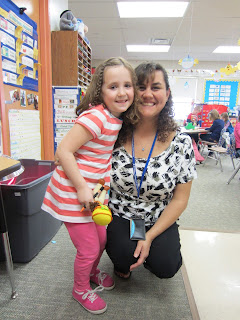 It was a bitter-sweet goodbye. We've had a great Kindergarten experience. Tia loves school and has made such progress with her anxiety issues since September. It was hard to leave.

Later that evening was the school art show. It was important for Tia to attend. They'd been talking about it for weeks, and she had several pieces on display. We made it to the show and then hit the road to Wisconsin immediately after. 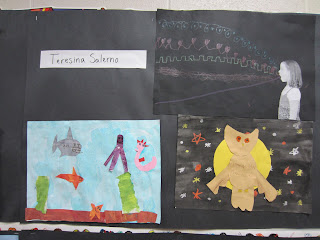 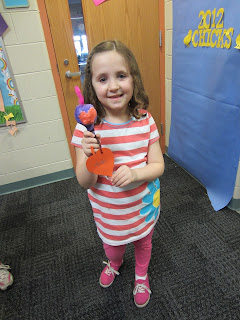 Phew, it was a crazy week for all of us, but we made it safely to our new home. We've got almost all the boxes unpacked and things are slowly getting back to normal. Gia said the other day "Mom, it's starting to look like home here". That makes me smile. Kids are resilient.

The girls had a few days off before starting at their new school. I think they appreciated being a part of the moving in process, and having some time to adjust.

They're both doing great in their new school. In fact they both go to the same school now which is great! They are adjusting so well, it amazes me every day.

So, here we are in Wisconsin, hopefully to stay for a very long time. I think I can speak for us all when I say we don't want to move again!