We celebrated my big girl's 7th birthday this past weekend. I was having a hard time with her turning 7. I don't know why, I just think this is the age where they start to change. I'd like her to stay my sweet little girl forever, but I know she's growing up and soon won't need me any more. It happens. I'm trying to prepare.

So here's a recap of all the celebrating we did, because you know we do birthdays in a big way over here. It's not a birthday, it's a birth-week!

The Grand folks flew in for the birthday extravaganza. Can you imagine it any other way?
I got them from the airport on Wednesday afternoon and we headed right to the school to surprise the girls.

Later we went out for a birthday dinner. Tia chose Japanese which made Daddy very happy and proud.


Friday was Tia's actual  birthday. When she woke up she was greeted with lots of pink decorations and balloons all over the kitchen. I told her she could have any breakfast she wanted since it was her special day. Guess what she chose? Yogurt and pretzels. How exciting. She's a low maintenance girl.

We also let her open the presents from the family before school... 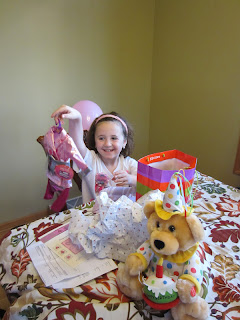 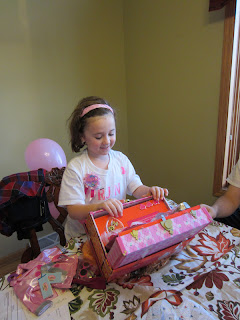 She got a new outfit from the Grand Folks, and chose to wear it to school for her special day...

Having to go to school on your birthday used to be such a bummer back in my day. Not anymore! The teachers and principal made such a big to-do about it being her birthday, she felt like Queen for a Day. The principal announced her name on the loud speaker in the morning, came to her class to wish her a happy birthday, and presented her with a sticker to wear that said "It's my Birthday". Her teacher put a balloon on her chair and made her a crown. So cool.
I had to deliver the class treat so decided to go a little early and have lunch with Tia. I didn't tell her we were coming because she gets very anxious, so it was yet another surprise.


For what I think must be the third year in a row, Tia chose a Princess birthday party. We were tempted to try to sway her decision, but then I figured this is likely the last year she'll be into the princess thing, because she'll be too cool for that, so we went with it!
We had to have the party on Friday night because Daddy was flying out Saturday morning for work. Tia refused to have a party without her Dad, so we broke from the norm and had an after dinner tea party.


It was a late night of dressing up and eating sugar, but everyone had a great time and Tia was happy.

On Saturday the hubby had to fly out so the kids, Grand Folks, and myself spent the day doing what Tia wanted to do. Her birthday, her choice.
Lunch at Panera, WITH dessert (we never let them get dessert), then off to the movies to see Hotel Transylvania. Both good choices.

So it was another successful birthday. Another year of a happy girl loving life.
May we be blessed with 100 more!
Posted by Ronda at 8:12 PM No comments:

Our home backs up to a golf course. My husbands company has their annual golf outing at that course. One of his coworkers mentioned that it would be cute to have our girls set up a lemonade stand at the fence line, and sell to the golfers as they go by our property. We all thought that was a cool idea too and had been planning on it for months.

Then, that same employee mentioned our plan to the golf course manager. That one tiny conversation changed everything, and this little lemonade stand idea got bigger and bigger.

The manager insisted that we take our business right onto the golf course, not at our fence line. He promised us our own golf cart so we would have a place to sell our stuff. He referred to us in an email as "the Cookie Girls". Um, that means we better be selling cookies too, right?

During a subsequent conversation with my sister, she said "Why don't you get the kids to donate the proceeds to a charity. It'll teach them a great lesson". Well, hot dog! That's the best idea yet.
While we were at church I checked out the bulletin board, scoping out the various organizations and events looking for funds. I brought the kids over and let them choose. It made them feel empowered, and part of the process.
They chose the Lakota Sioux tribe in South Dakota. Tia was especially struck by the fact that many of the homes on the reservation don't have heat or running water, and that the kids don't always have proper winter clothing. Her exact response was "Mom, we have to help these people!". O.K., then. We're on it.

The day before the golf outing I stayed home and baked and baked and baked. It was an all day project even though I chose 2 very simple recipes. I had gotten an email earlier in the day stating that there were about 100 golfers in our group, as well as another group of 15 who would be going by, and who would most likely buy from our cart. That meant LOTS of cookies.

Here are some of the goodies...


I cannot tell you how excited the girls were for this day. That excitement doubled when we told them we would be getting a golf cart. I was a little scared to drive the thing, I kept feeling like I was going to tip over, but eventually got the hang of it...


We had a fantastic time. The weather was perfect, the people were friendly, and we sold out of everything before the event was finished. We were invited to stay and have lunch with the golfers. Nice little bonus.

The very next day we went to church to make the donation. I introduced the girls to the woman who is leading the project. I had Tia give the woman the envelope of cash, and explain to her what we did to earn it. They were so proud, it just melted my heart!

At NO point did either of my kids suggest that we should keep the money. They never asked if they could have some, or buy something for themselves with it.

I'm glad we did this project. I bet our family will be doing more things like this in the future.

Charity and Compassion are taught at home.
Teach your children well.
Posted by Ronda at 9:19 AM 1 comment: