Part 2 of The Birthday Extravaganza!

I'm a little late in posting this but Thursday was Gia's 5th birthday and we spent the day together doing fun things. She planned every detail, like the little boss that she is!

First stop was the bowling alley. I told her I didn't think it would be all that fun since it was just the 2 of us, but she insisted. 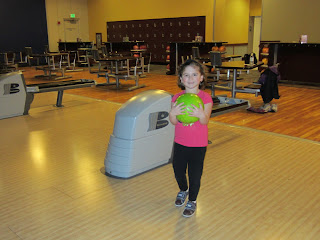 It started out OK but she quickly grew frustrated and bored since she wasn't getting any strikes! She's super competitive and it really bothered her that she wasn't 'winning', even though she wasn't playing against anybody. One day she'll be an Olympic gold medalist and we'll look back on this and say "ahhh, that's how it all started!".

After bowling it was off to the mall for lunch. She had originally wanted lunch at McD's but changed her mind when I told her they weren't giving away little ponie's in the kids meals this week. It was never about the food for her, it was all about the toy! Since we needed to pick up her new ballet shoes at the mall anyway, we went there for her favorite meal of soft pretzel sticks.
Of course, there had to be ice cream afterwards because, in her words, "It is a special occasion Mom". This kid knows how to work it. 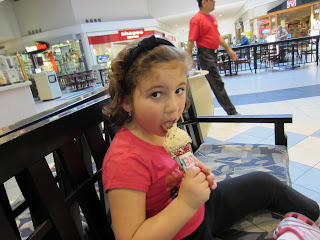 She did NOT want me to take her picture eating the ice cream but hey, I'm a blogger. These things must be done.
After spending way too much time and money at the mall, we headed to the local grocery store to pick up some flowers. All her idea mind you! She loves to look at the flowers every time we go grocery shopping, so she got it in her head that when it was her birthday, she could pick some out for herself. Daddy wanted to be the one to pick them out and bring them home to her after work but, NO WAY. She told him he wouldn't know which ones she wanted, and she'd rather pick them out herself. Quite a strong minded woman, wouldn't you say?!
With the flowers picked out, we headed off to the hairdresser. Gia chose a hot pink feather for her hair. I completely forgot to take a picture of that, but it's cute and she loves it.

Later, after Daddy got home from work and Tia was home from school, we decided to go for dinner at Chuck E. Cheese. Gia had received a gift card for her birthday and was ready to go spend it! Since it was a week night, the place wasn't really busy and they had a blast. 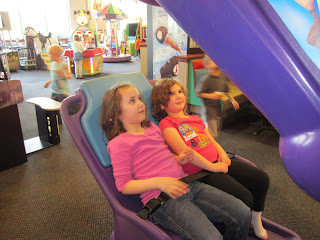 As you can see, even Daddy got in on the action and won a bunch of tickets for the kids.

It was a fun day, and even more fun for me to see what Gia chose to do on her special day. She's quite a character! Hopefully this is the start of a nice little family tradition.

We'll see in October what Tia chooses for her special day!
Posted by Ronda at 9:34 PM No comments:

Easter is my absolute favorite holiday. Traditionally we would invite a bunch of friends over for brunch or a BBQ and have tons of fun all day entertaining guests.
This year had to be a little different. The clock is ticking and we're running out of time before we have to be out of this house, so we decided to put all our energies toward packing and getting ready for the move.

We did still set aside some time for coloring eggs, and I have to say this has been the best year yet for that. The girls are getting older so the messes are getting smaller! 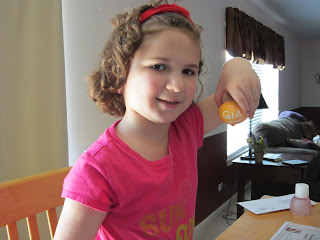 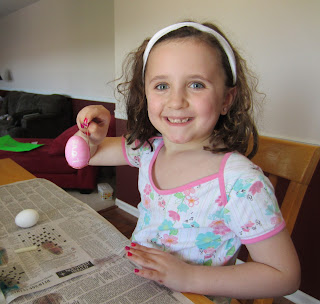 Easter morning was full of excitement as the girls tried to find their baskets. This year the bunny decided to really hide them since the girls are older and wiser. They actually get 2 baskets each. One is an Easter Bag that they got years ago from my friend Sheila, which is filled with non-candy items. The other is a basket for the good stuff. Um, I mean the candy items! 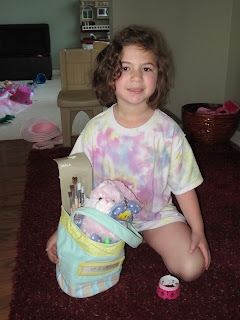 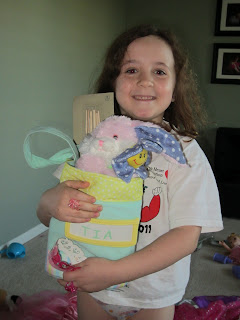 We had a nice family breakfast and then it was right into the basement for some serious packing and organizing. We spent several hours doing that, and then I decided it was time for a family dinner. Tia kept asking "Why do we have to take a shower and get dressed if we're not going anywhere?". My answer to that was "Because it's Easter!".
We had a pretty non-traditional meal of fish, potatoes, cous cous, and salad. It was the easiest thing to make that we would all eat.
What matters most is that we were all together at the same table enjoying the meal time conversation and being a family. That's what it's all about.

I hope you had an Easter filled with joy and little blessings too.
Posted by Ronda at 8:16 PM No comments:

My 'baby' is almost 5 years old. I'm not sure how the heck that happened but man that was fast! I swear I just brought her home from the hospital.

Leading up to the big day we were discussing her options for a birthday party. I actually encouraged her to invite some of her friends to one of my least favorite places (McD's) and have the party there. We're up to our eye balls in boxes here at the house and as most of you know, moving is an arduous task. It sucks all the energy from your body, and your house looks like a disaster area. My preference would NOT be to have a house full of preschoolers 2 weeks before our big move. However, the kiddo insisted that we have a Princess party at the house, and since she is the #1 Princess, I let her have her own way!

There was a total of 6 girls so it wasn't all that bad. I had it after lunch so I wouldn't have the added task of feeding everyone an actual meal. Keep it simple is my new motto.

Here are a few pictures from the party day...


Since her birthday was so close to Easter this year, we decided to have an egg hunt. We've done this before at her parties and it's always a big hit. This year was no exception.

It was a lovely afternoon and Gia fully enjoyed being the center of attention.

Her actual birthday is later this week when she will once again be showered with attention. She has chosen bowling and lunch (at that least favorite place!) for her special day.
I'll be sure to write up a part 2 to the birthday celebration post.
Until then...
Posted by Ronda at 8:07 PM 3 comments: